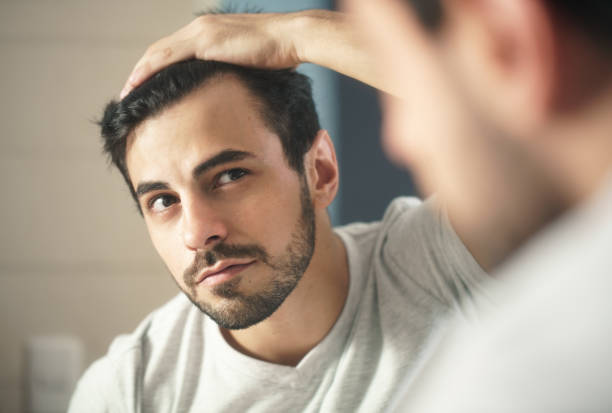 Male pattern baldness is hereditary and often starts with Men in their early 20’s noticing some hair thinning and progresses to a receding hairline and to typical baldness of the vertex and the anterior mid-scalp area. The primary cause of male pattern baldness, in genetically predisposed men, is due to increased levels of Dihydrotestosterone (DHT) which is produced by the conversion of testosterone to DHT by 5 – alpha-reductase enzymes.  Increased DHT binds to the receptors on the hair follicle and blocks the passage of vital nutrients essential for the hair follicle. The follicles gradually shrink and become miniaturized producing light-colored, fine vellus hair and eventually the hair follicle dies altogether resulting in baldness.

For NEW Spironolactone clients only, to learn how to request an INITIAL Consult

HOW TO REQUEST A PHYSICIAN CONSULTATION FOR A TOPICAL SPIRONOLACTONE PRESCRIPTION FOR MALE PATTERN HAIR LOSS:

Spironolactone is working for you, Yearly medical refill consultations are only $75 plus processing for a prescription refillable for up to 12 months.   Medical Wellness Center’s Online Men’s Hair Loss Consultations makes it easy for you to safely and effectively treat thinning, sparse scalp hair from the convenience and privacy of your PC without  time consuming and costly doctor visits. 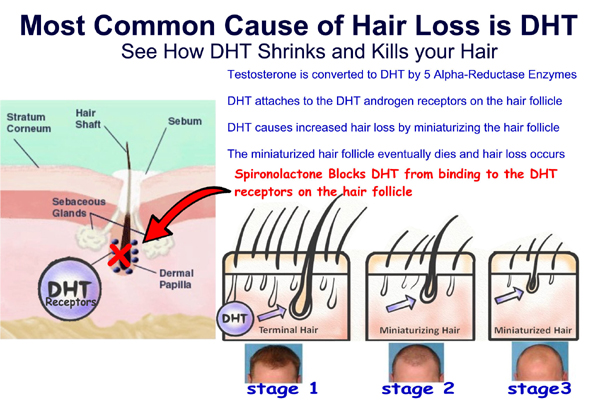 Spironolactone works as a DHT blocker and prevents the existing DHT in the scalp from binding to the DHT receptors in the hair follicle itself preventing further hair loss.  Spironolactone has been show to not only STOP hair loss, but also effective in promoting hair regrowth as well.

Topical Spironolactone is being prescribed for MEN only with male pattern baldness since hair loss in women can be indicative of a serious underlying medical condition!

WHAT IS MALE PATTERN HAIR LOSS?

Male pattern baldness,  androgenetic alopecia, is a very common condition in which men begin to experience thinning of the hair on the scalp.  These changes often start slowly in men in their 20’s and often progress to a receding hairline and/or balding on the top of the head. Male pattern baldness is believed to be hereditary and dependent on hormonal effects. The primary cause of Male Pattern hair loss and baldness is due to Dihydrotestosterone (DHT) which is produced by 5-alpha reductase conversion of testosterone to DHT. Men with male pattern baldness have increased levels of the hormone DHT and the hair follicles in the balding areas of the scalp become miniaturized.

Spironolactone is the active ingredient in the oral potassium-sparing diuretic medication, Aldactone, used to treat high blood pressure, fluid retention, heart failure,  and kidney problems.  However, it was also found to have an anti-androgen effect and positive effects of male pattern baldness.   The problem was that oral Aldactone (Spironolactone) caused side effects of breast enlargement in men and dangerous issues with hyperkalemia (too high potassium) which can cause arrhythmia  (abnormal heart rhythms).     When applied topically as directed, Spironolactone does not have the same systemic side effects as oral ingested Aldactone.  Spironolactone blocks the existing DHT in your scalp from damaging the hair follicles, while Propecia or Avodart prevent new DHT from being produced from testosterone.

HOW DOES SPIRONOLACTONE WORK TO TREAT HAIR LOSS?

Spironolactone works as  an anti-androgen DHT blocker preventing DHT from binding to the receptors in the hair follicles and has been found to reduce the amount of DHT in the body. When DHT binds to the hair follicle receptor, it blocks the passage of vital nutrients essential for the hair follicle.  The growth phase shortens and  the follicles gradually shrink and become miniaturized causing the hair shaft to become progressively finer in texture ultimately producing thin, short, pigment-free fine vellus hairs. Eventually the  hair follicle dies altogether resulting in male pattern baldness. Therefore, Spironolactone works to prevent the existing DHT in the scalp from causing further hair loss by binding to the DHT hair follicle receptor, and slows  the progression of hair loss caused by androgenic alopecia.  Male pattern hair loss is hereditary and genetically only the hair follicles on the top of the head have these DHT receptors resulting in the typical male pattern hair loss, androgenetic alopecia.

WILL TOPICAL SPIRONOLACTONE WORK FOR ME? WHAT ARE THE INDICATIONS?

Topical Spironolactone will not restart hair growth in areas where the hair follicles are completely dead and gone.  It will only thicken and stimulate the growth of working hair follicles.  Therefore it will work to save the hair you already have and thicken it and enhance its growth.  So if you already have a long-time established bald patch with absolutely no hairs, not even a few fine hairs, Spironolactone will not regrow the hair, but it will stimulate growth and thicken hairs in the surrounding areas.

HOW IS TOPICAL SPIRONOLACTONE SUPPLIED?

Topical Spironolactone, a topical androgen-blocker blocking the binding of DHT to the hair follicle receptor, is exclusively compounded by Murray Avenue Apothecary in either a 2% alcohol solution, lotion or cream; or a 5% alcohol solution, lotion or cream.  Due to the molecular structure of Spironolactone containing a sulfur group, there is a slight odor to the formulation. Although you may have used creams in the past produced in China, there is no way to remove the sulfur group to make the product odorless without affecting the molecular structure – any odorless product is NOT Spironolactone USP. The formulation compounded by Murray Avenue Apothecary  comes in either a 2% or 5% strength in either an alcohol solution, lotion or cream with added scent to mask the sulfur odor.

WHEN AND HOW OFTEN DO I HAVE TO APPLY SPIRONOLACTONE TO THE SCALP?

There is no right or wrong way to apply spironolactone topically for male pattern baldness. Spironolactone can be applied to the scalp only in the affected problem areas, or can be applied more widely to adjacent scalp areas to preserve the hair as well.  It works best in areas of the scalp where the hair is thinning.  Just as with any other hair loss medication, applying to slick bald areas will not likely help as the follicles may be completely dead.   Apply a pea-sized amount of spironolactone on your fingertips.  Rub your fingertips together and then apply a thin layer to your scalp and massage into the desired areas in a gentle, circular motion. Repeat these steps until you have applied to all the desired scalp area.   Clinical studies testing the effectiveness of topical spironolactone and hair loss recommend daily application.  You can apply the topical formulation anytime during the day.  If you are also using topical minoxoxidil, apply topical spironolactone and topical minoxidil separately.  If applied simultaneously, the two can possible react with each other potentiating the smell of the formulation.  Since it takes several hours for Spironolactone to react with Minoxidil, they can be applied fairly close together in time, but not simultaneously.

HOW LONG DOES IT TAKE TO NOTICE RESULTS?

Since hair grows very slowly, it takes approximately 3 months to start to notice the effectiveness of the drug treatment. Hair regrowth does not happen overnight. Due to the hair growth cycle, it can take a while, at least 3 – 6 months, to even start to notice improvements from using topical Spironolactone. Don’t be discouraged if you don’t see improvements right away.

HOW LONG DO I HAVE TO USE TOPICAL SPIRONOLACTONE?

Male pattern baldness is a life-long, chronically-progressive condition.  The underlying predisposition to hereditary male pattern hair loss is always present.  Regardless of the dramatic effects you may experience from prescription treatment, you must continue to use this medication regularly.  If you stop the treatment your genetic predisposition to baldness will result in eventual loss of the new hair re-growth and progression of further hair loss within a couple of months. With regular use you will continue to experience thickening and regrowth of your hair.

CAN TOPICAL SPIRONOLACTONE BE COMBINED WITH OTHER HAIR LOSS TREATMENTS? 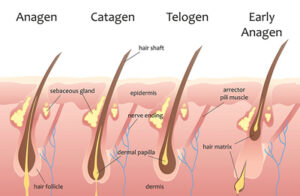 Yes but don’t use at the same time. It is best to introduce one at a time in case you get scalp irritation you can identify which product is the cause. Topical Spironolactone is one of the most  potent anti-androgens effective for male pattern hair loss. Furthermore, it can be used in conjunction with other treatments creating a synergistic effect – blocking and decreasing production of DHT, blocking the DHT androgen receptors on the hair follicle, extending the Anagen growth phase and stimulating regrowth:

WHAT IF I FORGET TO APPLY TOPICAL SPIRONOLACTONE?

If you miss a day, don’t try to catch up.  Instead just apply it like normal the following day.  Using Spironolactone more than once a day will not increase the growth of your hair.

WHAT ARE THE POSSIBLE SIDE EFFECTS OF TOPICAL SPIRONOLACTONE?

Oral Spironolactone (Aldactone)  can have many serious side effects  from feminization in men from gynecomastia (breast enlargement in men), testicular shrinkage, premature ejaculation to possible fertility issues in men which reverses with cessation of the drug, hyperkalemia (too high potassium) which can lead to serious heart arrhythmia, gastrointestinal bleeding, low blood pressure, severe allergic reactions etc…   When used topically as directed, Spironolactone does not have these serious system side effects.  Spironolactone prevents the DHT from attaching to the DHT receptors in the hair follicle without decreasing circulating levels of DHT in the body.  Topical Spironolactone has been shown to be highly effective in the treatment of androgenic alopecia and the side effects were minimal to non-existent.   When applied topically to the scalp, spironolactone appears to have only a localized effect.  The topical Spironolactone gets absorbed, but metabolizes and essentially does not have any systemic side effects.

WHAT IF I EXPERIENCE SIGNS OF ALLERGIC REACTION?

If you experience any signs of an allergic reaction including  trouble breathing, rapid or weak heartbeat, seizures, redness, swelling, itching or pain, seek immediate medical assistance.

WHAT IS THE MOST IMPORTANT INFORMATION I SHOULD KNOW ABOUT ABOUT TOPICAL SPIRONOLACTONE?

WHO SHOULD NOT USE TOPICAL SPIRONOLACTONE?

Before Proceeding to the Medical Consultation Form  please read

CONTRAINDICATIONS, PRECAUTIONS and WARNINGS
and accept the Waiver of Liability

If you experience any signs of an allergic reaction including trouble breathing, rapid or weak heartbeat, seizures, redness, swelling, itching or pain, seek immediate medical assistance.

Do not get in eyes – if accidentally gets in eyes flush with water immediately and if irritation persists seek immediate medical attention in an emergency room.

I DO NOT HAVE ANY OF THE ABOVE CONTRAINDICATIONS:

In order for Medical Wellness Center Physicians to provide you with the best care you need to reply honesty to all questions and you need to understand any and all risks and side effects associated with Topical Spironolactone for male pattern hair loss.

By accepting “I Agree” means that you have read the above contraindication and warnings and honestly acknowledge that you do not have any of the above contraindications to Topical Spironolactone therapy and understand that insurance will not cover the cost of the medication. Also, I am aware that I need to inform my doctor that I am using Topical Spironolactone.

Where Alternative and Traditional Medicine Come Together for Total Wellness